An Occurrence At Lake Titicaca 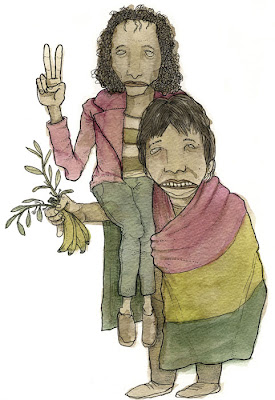 When I was here, I wanted to be there; when I was there, all I could think of was getting back into the jungle.

At this point, however, Black Pazuzu was not even aware that Kevin DuBrow had recently passed on. Had he known, he no doubt would have thought it both sad and bizarre that even in death, Quiet Riot’s lead singer was relegated to covering Slade. And because bad English-language puns seem not as bad when English is your second language, it also would have occurred to him that the vocalist’s “metal health” had finally failed.

“I think the coca leaves are getting to me, Evo.”

Only when Black Pazuzu said this, he said it in Spanish.

“I know what you mean,” Morales replied, also in Spanish. The Bolivian president casually produced a banana from his coat pocket, peeled it, and took a bite. Suddenly and without preamble, he began cursing the Coca-Cola Company aloud.

Black Pazuzu groaned audibly. He knew this presidential diatribe well. Coca-Cola was the only American corporation authorized by the US federal government to import and process coca leaves from Bolivia. The gringos had also forbid the export of coca leaves to anywhere else in the world and had been funding coca crop eradication in since 1988. This preposterous and flawed transnational scheme was called Law 1008, and Black Pazuzu was familiar with its articles and provisions. Morales himself despised it, and had famously appeared before the UN after his election, making a clear distinction between coca and its most notorious byproduct while denouncing Law 1008 to the palefaces’ pale faces. And here on the bank of , he denounced it again.

“The worst enemy of humanity is capitalism,” Morales said for what Black Pazuzu felt was easily the thousandth time since the two men had first snorted rails off the back of a toilet tank at an Inquisition show in five years ago. (Inquisition is Morales’ favorite band—he even secretly had them flown in to play a private post-inauguration bash.) “That is what provokes uprisings like our own, a rebellion against a system, against a neo-liberal model, which is the representation of a savage capitalism.”

Had there been a large crowd of coca farmers gathered, Morales’ words would have surely been met with cheers and applause. But Black Pazuzu’s thoughts had moved on to a recurring fantasy he liked to call “Live Mystical Violence.”

He imagined himself onstage in full corpsepaint, stripped to the waist and soaked in goats’ blood as he and his band shredded their way though their signature song, “La creación, la traición, la violación y la caida de los Angeles,” the unholy berserker aggression of which would no doubt bring the eternal full-metal furies of both Lucifer and Viracocha down up on the heads of gringo and brown man alike. As usual, the audience was comprised entirely of topless women and the members of Slayer.

“Fuck, yeah,” Black Pazuzu muttered as his eyes rolled back in his head. “Muerte total…”

“Silencio!” Morales shrieked, cocking his ear toward the jungle. “It’s the FARC guerillas! They’ve come to assassinate me!” The Bolivian president began calling out for his bodyguards.

A branch snapped. Tropical vegetation rustled. A pair of silhouetted figures stepped out from the dense underbrush into the sweaty Bolivian dusk. At first, Black Pazuzu couldn’t make out their faces, but he could tell they were holding hands. As the figures drew closer, Morales whipped out his TEC-9 and a machete. Just as the president was about to go shit-house on the approaching interlopers, Black Pazuzu stayed his hand. He recognized these men: It was Kevin DuBrow and former Quiet Riot guitarist Randy Rhoads.

“Hey, dudes—we’re getting the band back together,” DuBrow said with a smile. “You in?”

They all laughed and shook hands. They sat on the bank of and chewed coca leaves, plotting what would surely be their complete domination of the world metal circuit.

By the time the sun rose the next morning, all four of them had vanished.

This bullshit originally appeared in the February 2008 issue of Decibel magazine but was written in November of 2007, just days before Kevin DuBrow's death by cocaine overdose.