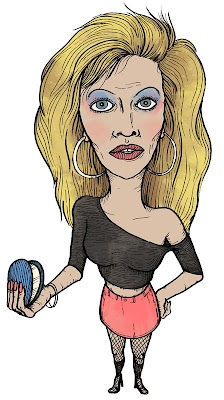 I was talking to the other day. Had he been present, he would have heard me telling this story I like to recount after about half a beer to whoever is within earshot:

I remember most of the details like it was yesterday. My barely competent attorney, Juan Perez, and I were at a Sebastian Bach show in Nashua, New Hampshire. This was probably like 10 years ago. Almost eleven. After the show—yeah, it was awesome—we spotted a couple of skanks leaning against the bar, waiting to be escorted backstage for an audience with “Baz.” These chicks were straight out of ’87—teased hair, short leather jackets, ripped fishnets, makeup applied with a spatula, hoop , the full creature double feature. This is New Hampshire, remember. At a place called Sharky’s. Which is pretty much all you need to know. Well, almost. Because then Skank One turns to Skank Two, waves three fingers in front of her own tropical-fish-like visage and asks, “How’s the face?”

It was an excellent fucking question. Because what if The Face had been obscured by something other than five pounds of foundation, eyeliner and rouge? Or what if said foundation, eyeliner and/or rouge had been smeared across The Face in an unsightly manner, making Skank One look like the famous dead actor from that overrated movie? (Granted, that movie had not been released when this happened. But you can see what I’m getting at here.) What if dust, foodstuffs or other detritus had become lodged in the gelatinous beige craters that just this morning had been plain old acne scars? The horrors were endless, but none more frightening than the potential result: If The Face was not presentable, perhaps Mr. Bach would be disinclined to put his wee-wee in or around it. Not that we have the slightest clue whether or not Skid Row’s former lead vocalist ever engaged in these kinds of sweaty extracurricular activities at midnight on a Tuesday, or whatever, in Nashua, NH. Last time we checked, he’d been married for like 300 years.

The upshot of witnessing this exchange is that my attorney and I replicate it at least a couple of times a month. Whenever we go out to lunch and one of us feels as though we might have crumbs in our beard, we bust out three fingers and a quick “How’s the face?” The question has to be asked with the kind of corpselike seriousness that Diane Sawyer used to summon effortlessly on 20/20 when she wasn’t completely shitfaced. If this routine qualifies as a male bonding ritual, I figure it’s at least way less gay than shirtless chest-bumping at a Rage Against The Machine concert, and maybe only slightly gayer than, I don’t know, watching football on the idiot box, eating hot wings and grunting at each other? But Americuh accepts the idiot box/hot wings/grunting scenario as so stereotypically hetero that its prominence in the national milieu reeks of overcompensation for all the ass-grabbing and bending over that happens on the scrimmage line. It’s like Chris Barnes’ Cannibal Corpse lyrics or something. Methinks the lady doth protest too much, dude. What’s that from, anyway? Shakespeare? Nothing gay about that.

But I seem to be getting off track here. Somewhere on an air-conditioned indoor course in Arizona, is losing interest in my story. Oh, right: The Skanks. The 14-year old inside of me—you know, the one who writes for this magazine—is still secretly in love with those skanks, even though neither of us can remember what they looked like. (That 14-year old would’ve been just three years old back then, but he still knew a sure thing when he saw it.) In a way, those lusty ladies weren’t all that different than my attorney and I that night. We were all reliving a particularly fond piece of our teenage years; we were all psyched to be getting our drink on in the general vicinity of a once-mighty rock legend, and we were all definitely singing along to “Eighteen And Life.” At Sharky’s. In Nashua. Wow. The more I think about it, the more I sincerely hope those faces made the cut.

This bullshit originally appeared in the October 2010 issue of Decibel magazine.

Posted by bennett at 3:19 PM No comments: