Letter To The Editor 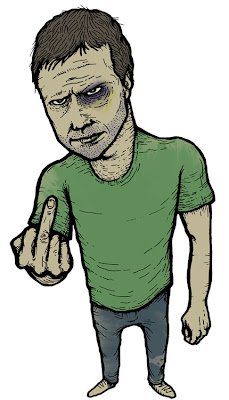 It was awesome hanging out with you down in the other day. Psyched you could make the trip. My favorite part was when Witte ran over that old lady with his fixed-gear. That’s what you get for being a cripple in public.

Sorry about that thing with those dudes at the bar, though. I didn’t realize how pissed and, like, Samoan they were until his fist was about four inches from your skull. I know you’re a vegetarian and all, but that trick with the steak over the eye really does reduce swelling. I know ’cause I saw it on The Brady Bunch once. That was a sweet episode. How hot was Maureen McCormick back in the day, by the way? I would’ve loved to get handsome with her when she used to swap hand-shandies for cocaine. I had some pretty vivid dreams about that chick until my adolescent fantasy rolodex replaced her with Phoebe Cates from Fast Times and Samantha Fox’s chest.

So, I’ve been mulling over some of the stuff we talked about. In retrospect, I realize that 5000 words of speculative meta-history on how the lyrics to Siouxsie and the Banshees’ “Night Shift” provided the basis for every Cannibal Corpse song ever written is a bit excessive. But I think my point remains valid. Would you let me go 1800?

You’re totally right about that Appice Brothers cover story. I don’t know what I was thinking on that one. Yeah, they’re drum legends and all, but dB readers probably aren’t super-familiar with the work of King Kobra and, like, 3 Legged Dogg. I don’t care what anyone says, though: That first Blue Murder album is Hall Of Fame material.

I’m torn about the “Win A Candlelight Dinner With Glen Benton” contest. I’ve met that cat, and I’m fairly certain he’ll be bummed if a dude shows up to that fancy French joint the label is trying to book this thing at. Also: Since when does have a restaurant that serves something other than tainted shellfish and Coors Light?

I know I told you this already, but it bears repeating: I am totally cool with turning the entire Up Front section over to Fenriz.

Despite the fact that I argued vehemently against it for like 15 minutes, I’ve decided that letting Jeff Walker and Seth Putnam write all the reviews next issue might actually be kinda fun. Especially if we can dress it up with some of those photos Seth has been posting on the Interhole lately. Historically, dB seems to do really well at the newsstand when we have shirtless fat dudes in the mag. I’m not sure if the numbers will hold up if we switch it to bottomless fat dudes getting their dicks sucked by bony skanks from , but there’s only one way to find out.

Can you imagine the elegant romance of that first date, by the way? I can:

Seth: On your knees, bitch. This thing ain’t gonna suck itself.

Skank: Do you mind if I smoke while you fuck me?

Seth: You are so goddamn hot right now.

Skank: Do you mind if I snore while you fuck me?

Skank: Just whip your dick out and chuck it into my pussy.

Other stuff I’ve been thinking about:

* Do you think we can get Deepak Chopra to interview Trey Azagthoth? Because I just don’t have that kind of time. (Is that new Morbid Angel album even coming out?)

* Can you hook me up with Jerry A. Deathburger’s email? I need to tell him about the grind band I’m pretending to start with a couple of the dudes from The Red Chord. We’re gonna call it Scab Mangler. Our first album will either be I Hope You Die In A Cancer Fire or I Love It When You Call Me Big Poppa.

P.S.: I got dibs on the Leatherwolf Hall Of Fame.

This bullshit originally appeared in the December 2010 issue of Decibel magazine.

Posted by bennett at 1:39 PM No comments: