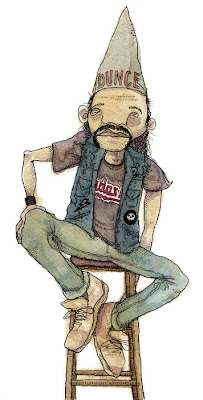 It seems like everybody is running their mouths these days about how “metal” they are or how metal that band is or how un-metal that one dude over there with the white belt is—but it seems like the definition of whom or what is “metal” varies from person to person. Plus, there are tangential factors to consider, like how one can be “metal” but not “kvlt” or “grim” (but one can NEVER be “kvlt” or “grim” without being “metal”), etc. etc., blah blah, blah. Lucky for you, we here at Decibel have decided to settle this shit once and for all, or at least until next time. What follows is our officially sanctioned, scientifically tested, Tony Iommi-approved Full Metal Quiz. Before you begin, remember this: There are no “right” or “wrong” answers here—and more importantly, there are no “winners.” Just “losers.”


a) Carve the Slayer logo into your forearm with the razor blade from that homemade necklace you stole off of Dimebag Darrell’s corpse.

b) Totally punch that chick from Nightwish in the face.

c) Go on a school shooting spree and blame it on Megadeth.

d) Have a three-way with Karl Sanders and Gene Hoglan.

b) Breaking the law

c) Waiting for another thing, which you’ve been assured is coming.

d) All of the above


a) Arpeggios, dude. Lots and lots of arpeggios.

b) Halo, online with Trey Azagthoth.

d) Russian roulette and Slaughter Of The Soul

b) They have three guitar players

c) They have t-shirts that match your Vans slip-ons with the all-over Killers print.

d) “You know when Bruce says, ‘Scream for me, ,’ on Live After Death? I swear to god, he was pointing right at me when he said that, dude.”

c) Wolves In The Throne Room

6.The band t-shirt you are currently wearing is:

b) Slayer (a Hot Topic exclusive)

7. Your favorite Cannibal Corpse album is:

a) Butchered At Birth

b) The one with “Entrails Ripped From a Virgin’s Cunt”

d) All of the above

8. When Metallica cut their hair, you:

b) Were ten years old

d) “Grew my hair out even longer, dude. Fuck those guys.”

9. When you found out Rob Halford was gay, you:

b) Realized what he meant by Point Of Entry

c) Questioned your own sexuality

10. The last time you got drunk and threw up…

b) Jägermeister poured out of your nose and eyes but your tight broseph Randy from Goat Puncher totally hooked you with a ride home.

d) The fucking pigs made you clean out the back of the squad car with your favorite Napalm Death longsleeve, but the joke’s on them, dude, ’cause you totally took a dump on the floor of that holding cell

This bullshit originally appeared in the November 2007 issue of Decibel magazine.

Posted by bennett at 4:51 PM No comments: 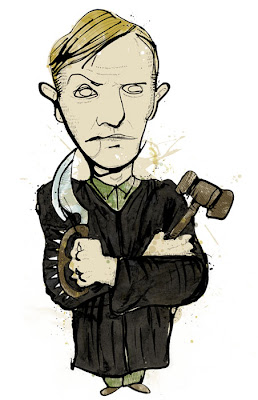 After several sad, unsuccessful forays into reality programming, the Norwegian Broadcasting Corporation (NRK) finally stumbles upon the winning formula in late 2008, shortly after Burzum mastermind and convicted murderer Varg “Count Grishnackh” Vikernes is released on parole. It’s a stroke of pure, unmitigated genius from the otherwise morose producers at the NRK: Why not give the national bogeyman his own TV show, complete with pretentious rhetoric, full-costume Tolkien readings and ultra-nationalist high jinks? Better yet, why not give him a gavel and a robe and prop him up as a celebrity arbiter, Judge Judy-style? Of course, it’s no fun unless the decisions are legally binding, so all litigants are required to sign a waiver agreeing that the Count’s verdicts are final.

And now we take you to today’s hearings, already in progress…

What you are witnessing is real. The participants ARE NOT actors. They are actual litigants with a case pending in a Norwegian municipal court. Both parties have agreed to dismiss their court cases and have their disputes settled here, in our forum: Count Grishnackh’s Court.

Count Grishnackh: Mr. Tiegs, am I to understand that your Lhasa Apso micturated upon the plaintiff’s Persian rug?

Tiegs: That’s my stage name, your honor—you know, my nom de guerre? I figure if you get to use yours, then…

Grishnackh: Silence! I will suffer neither fools nor insubordination in my courtroom. Especially from someone who runs around calling himself “Satan’s Minister On Earth” and has the audacity to show up with all that shit on his face. You’re lucky I don’t hold you in contempt. So, pretty please—with sugar on top—just answer the question, Mr. Tiegs.

Tiegs: [Rolls eyes] Your honor, Snickers—the dog, I mean—didn’t do anything to Gaahl’s… I mean Mr. Espedal’s… I mean the plaintiff’s rug.

Gaahl: That’s bullshit, your honor! Snickers blew a hot, smelly piss all over my new Persian and then left a steaming dump at the end of the driveway. My mother stepped in it when she was bringing me my blankie and a bottle of warm breast milk, your honor.

Grishnackh: I’ll ask you to wait your turn before opening your goddamn piehole, Mr. Espedal. But tell me more about this “blankie” of which you speak. And, uh, the breast milk…

Gaahl: Oh, did I say that out loud? Sorry, your honor.

Grishnackh: You’ve been in this courtroom before, haven’t you, Mr. Espedal?

Gaahl: Not this particular courtroom, your honor, but one very similar to it, yes. It went badly.

Grishnackh: So I’m told, Mr. Espedal; so I’m told. And what about these damages you’re seeking from the defendant? 190,000 kroner seems like a lot for a rug. Mighty Jewish of you, isn’t that, Mr. Espedal? And it says here… [Puts on eyeglasses, which are around his neck on a tasteful silver chain] that you also want Mr. Tiegs to be crucified “for as long as the court will legally allow.” There’s also something about the blood of his firstborn. Isn’t this a bit excessive—even for you, Mr. Espedal?

Gaahl: Well, you see, this rug, your honor…

Grishnackh: I know, I know—I read the complaint, Mr. Espedal. “It really tied the room together.” We’ve all seen the film. But the question I have is one of motive: Why would Snickers urinate on your rug in the first place?

Gaahl: Infernus told him to do it, your honor. He’s a dog whisperer.

Grishnackh: Can you prove this, Mr. Espedal?

Grishnackh: [Sighs] Mr. Tiegs, are you a dog whisperer?

Tiegs: Puh-lease, your honor. I can’t even get him to listen to me when I’m talking out loud.

Grishnackh: Right. Well, just the same, I’m finding in favor of the plaintiff. As we all know, the Lhasa Apso is an inferior Oriental breed incapable of advanced Aryan aptitudes like bladder control. But 190,000 kroner for a rug is ridiculous. The defendant is ordered to pay damages in the amount of 75,000 and … oh, let’s say a pint of blood from his firstborn. [Bangs gavel] Next case!

This bullshit originally appeared in the June 2008 issue of Decibel magazine.
Posted by bennett at 5:15 PM No comments:

The Satanic Rites Of Darlene Zschech

And now, if you take the Necronomicon back to the library, I’ll meet you there as soon as I can.

Every Walpurgis, it’s the same old shit with you, Darlene. You wake up to find yourself strapped to a stone altar, tits up and naked as a jaybird, staring at the sigil of Baphomet on the ceiling while a young Dean Stockwell look-alike hovers over you with his admittedly impressive lip broom, the unblinking eye of his crooked dick staring at you greedily as he unveils a chestful of shitty tattoos and mumbles something about his granddad and “fertility rites.” Next thing you know, he’s pawing you all over, “like, totally feeling you up and being gross.” You know violation is imminent, but you’re helpless to prevent it. And then you’re totally fucking pregnant with the Child Of Satan again.

What is it with you, Darlene? There’re only so many times I can drive you over to the clinic and wave my pepper spray at those batshit protesters. I know we used to joke about “75 and a ride,” like it’s Fast Times At Ridgemont High or some shit, but last time the doctor gave you a fucking punch-card. You’re probably psyched that your eleventh abortion is gonna be on the house or whatever, but this is getting ridiculous.

I don’t even feel bad for you anymore, because that’s what you get for drinking the mystery tea, Darlene. Fuck the —remember Rosemary’s Baby? I only made you watch it like ten times, even rewinding the parts where Ruth Gordon keeps pushing that weird health shake on poor Mia Farrow. What about Jackie Treehorn’s White Russian in The Big Lebowski? You love that movie, Darlene—especially the part where “he fixes the cable”—but you never seem to understand why The Dude ends up in the back of a cab listening to the fucking Eagles. What about that creepy urban legend about waking up in a bathtub full of ice with no kidneys? They’re called FUCKING ROOFIES, Darlene.

I happen to know that mom told you not to take mystery tea from strangers, and yet you persist in being a total blonde. This is pretty obvious shit I’m talking about here, Darlene. Basic safety training. So the next time Lucifer impregnates you, you’re on your own.

I guess I should have seen this coming, though. I mean, what kind of 15-year old girl thinks Anton LaVey is “hot”? But you’re 42 now, Darlene. Your bald plagiaristic fantasy-rapist has been dead for ten years now, and yet you still sleep with any sad goth loser who can quote a few verses from The Satanic Bible. And those are the relatively normal ones, Darlene. Some of these pompous, slow-talking weirdos you bring home from the bar give me the creeps.

As your sister and roommate, I obviously feel obligated to say all this stuff—even if it’s for the hundredth time—but I think we’re approaching critical mass here. Your selective deafness has resulted in what appears to be a severe and potentially permanent personality disorder. I feel like I need to stage some sort of intervention—or maybe “exorcism” is the proper term. But even that doesn’t seem drastic enough, Darlene. Maybe I should just sign you up for one of those extreme behavior modification programs. Like, I don’t know—the marines. Sometimes I catch myself wishing that you would just HAVE THE FUCKING KID one of these times. Maybe the unholy vengeance that will be wrought upon the unsuspecting citizens of our beloved will make you feel so guilty and shitty that you’ll learn to give that sloppy clam-box of yours a rest. Even if you give the little monster up for adoption, you’d have to live with the fact that someone somewhere is raising a smug little Damien Beelzebub who will nonchalantly murder his rich parents, their maid, and the obsessive local priest before eventually growing up to become a flesh-eating, fire-shitting, cloven-hoofed Bringer Of Death.

Seriously, Darlene—is that what you really want?

Posted by bennett at 4:49 PM No comments: