The Music Of Decline 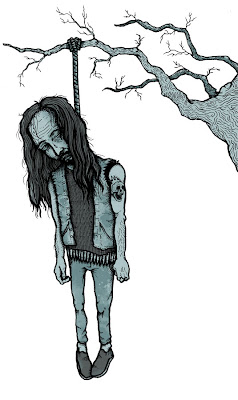 Decaying states and men ripe for doom do not, of course, lack music either, but their music is not serene.
—Herman Hesse, The Glass Bead Game, 1943

Ladies and gentlemen, the fabled doomsday may yet be upon us. Mayan 2012 prophecies and the inane ravings of Alaska’s ex-governor (and her Christian fundamentalist ilk) not withstanding, the aberrations that have appeared in the filament of our daily lives are too numerous to count and too obvious to ignore. Here at Decibel magazine, the signs are more or less clear. The vast majority of the “music” being churned out at an alarming rate by artists of the musical and “con-” variety is severely lacking in those qualities that one might attribute to music or even “art.” There is no need to name names. Fingering the individual culprits would not only take forever (they are multiplying and reproducing as we *speak*); such a task would also prove pointless. The system itself is broken, perhaps irreparably so. The music of decline has sounded.

We need only to look to Herman Hesse, the late, great philosopher and poet, for confirmation. Back in 1943, at the height of World War II, a full five years before Ozzy Osbourne was even swimming in his dad’s ballbag, Hesse foresaw the pox that vexes and blights us. That was the year the Nobel Prize-winning author’s futuristic novel The Glass Bead Game, alternately known as Magister Ludi, was first published in Switzerland. (Hesse’s clairvoyance may stretch back even further—he began writing the book in 1931.) “The ‘music of decline,’ has sounded, as in the wonderful Chinese fable,” Hesse wrote. “Like a thrumming bass on the organ, its reverberations faded slowly out over decades; its throbbing could be heard in the corruption of schools, periodicals, and universities, in melancholia and insanity among those artists and critics who could still be taken seriously; it raged as untrammeled and amateurish overproduction in all the arts.”

Hesse’s compelling prediction obviously speaks to a number of no less important symptoms, but for our purposes, it is this “untrammeled and amateurish overproduction” that concerns us here today. He continues: “If music is not serene, people grumble and life is deranged. All this arises from mistaking the nature of music and seeking only tempestuous tonal effects. Therefore, the music of a well-ordered age is calm and cheerful, and so is its government. The music of a restive age is excited and fierce, and its government is perverted.”

Have truer words ever been spoken, ladies and gentlemen, in regards to our ongoing state of affairs? One could argue convincingly that our government has been corrupt since its inception, but when we overlay the timeworn narrative of rock n’ roll, starting with its derivation from blues and early and abating perception as “immoral” (a la jazz) and its subsequent offshoot into heavy metal, we arrive at a junction where the history of our nation and that of its music become inextricably intertwined. (See: the rise of Elvis under Eisenhower; the British Invasion under Johnson; the rise of Hendrix/Joplin/Morrison, as survivors of their counterpart in abrupt mortality, Kennedy, under Johnson and Nixon; the decline of Elvis under Nixon, the rise of hardcore and thrash under Reagan, etc.) Fast forward to the ’90s under Bill Clinton: As the middle class idles in obesity and disengaged happiness, the Disneyfication of America ensues via the saccharine pop stylings of the Backstreet Boys and Britney Spears while heavy metal debases itself as “nu-metal” via Korn and Limp Bizkit. The latter prove to be harbingers of decline under the next administration—not of music, but rather of the nation itself. Enter 9/11, Afghanistan, Iraq, the Patriot Act, etc. Meanwhile, extreme music gets fucking awesome during the Dubya years and the increasingly robust Internet Age with its attendant blogosphere, though now the coverage of said music (save for Decibel, of course) becomes more scattershot than ever. Hesse foresaw this as well: “A torrent of zealous scribbling poured out over every ephemeral incident, and in quality, assortment, and phraseology all this material bore the mark of mass goods rapidly and irresponsibly turned out.”

As a nation, it appears we have made yet another cultural flip-flop under the patronage of Barack Obama. While our political future seems at least somewhat more auspicious, bad music has again proliferated on both sides of the mainstream/underground divide, polluting the pages of publications both print (sadly, even of Decibel, though the offenders are generally called out as such) and digital. What does this mean for our beloved heavy metal? And in terms of America’s future as the lone superpower cowering in the long economic and military shadow of China? Again, Hesse gave us the answer almost 70 years ago: “We recall that in the legendary China of the Old Kings, music was accorded a dominant place in state and court. It held that if music throve, all was well with culture and morality and with the kingdom itself… If music decayed, that was taken as a sure sign of the downfall of the regime and state. The poets told horrific fables about the forbidden, diabolic, heaven-offending keys, such as the Tsing Shang key, and Tsing Tse, the ‘music of decline’; no sooner were these wicked notes struck in the Royal Palace than the sky darkened, the walls trembled and collapsed, and kingdom and sovereign went to their doom.”

This bullshit originally appeared in the February 2010 issue of Decibel magazine.
Posted by bennett at 2:58 PM 1 comment: