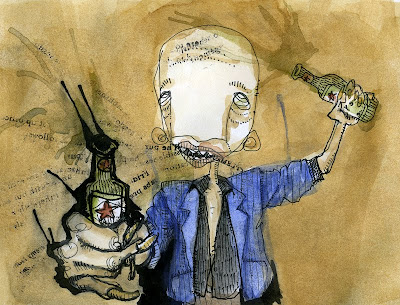 I miss the lovin' that you gave to me/On top of you is where I wanna be/Your body's carved in stone in my mind/I see your pony tail from behind.

They say history repeats itself, but they never seem to mention that it will occasionally try to finger-bang you in a Hollywood rock bar on Saturday night.

There we were—your humble narrator, my business manager, Juan Perez, and our manservant, Gerwick—knocking back a few cold ones in our reserved booth at the Burgundy Room on Cahuenga Boulevard. We’d just been informed by the owner that they no longer soak the bar down with lighter fluid and set it on fire to the tune of Motörhead’s “Ace of Spades” at midnight, so there was no real reason to stick around.

My business manager got up for one last round, and spotted a pile of teased blonde hair hunched over a warm Heineken at the bar. I’d noticed the dude a few minutes after we walked in, and he hadn’t moved since. When I owe my business manager money (which is pretty much always), he likes to torture me by hauling the drunkest shithead in the bar over to our table and then leaving him/her with me. I had already sponged three drinks off him tonight, so I wasn’t the least bit surprised when he came back with the hair farmer in tow. Dude was in his mid-to-late 40s, rocking a sky blue Miami Vice-style sport coat and a black shirt unbuttoned down to his sagging navel. Like every third person I meet, he seemed convinced I was “Rob Zombie” and settled into our booth next to my business manager, who immediately got up and encouraged his companion to “slide in next to Rob.” He was swollen and puffy, his jowls flecked with spit as he launched into a half-coherent tirade about what he perceived to be the dismal state of the Hollywood rock scene.

Upon learning that our new friend was a former member of a reasonably successful 80s cock rock band (for anonymity’s sake, let’s just say it was Britny Fox), my manager immediately bought him another drink—which was to be expected, really: My manager is a notorious cock rock fiend who will buy drinks for and/or share drugs with anyone even vaguely affiliated with the genre, no matter how obscure. I could tell by the look in his eyes that his only regret was that our new friend (henceforth known as Britny) wasn’t his personal hero, former Bang Tango singer Joe LeSte.

“You guys are cooool,” Britny slurred, as he kept shaking our hands and toasting us every 3 ½ seconds. He was a close-talker, and spittle flew from his mouth in torrents as he ranted and raved about his glory days on the Strip. At one point, he also claimed to be a former member of Spread Eagle (a band that released two seminal coke-metal albums in the early 90s), but this turned out to be false when my business manager checked his LP collection later that night. Which is too bad, ’cause it would’ve made our boy seem a lot cooler.

About ten minutes into the conversation, Britny had fucking X’s in his eyes. He was also touching my arms, like, a lot—and the incessant spitting was really starting to get on my tits.

“I used to run the Strip,” he moaned.

“Then what the fuck are you doing on Cahuenga?” my business manager replied.

“Who’s got the drugs?” Britny asked.

“Yeah, I’ve got the drugs,” he replied. “You guysss are really cool.”

He kept touching me as he talked, and then started pinching my arms with his long yellow fingernails. He clearly wanted to sniff coke off our buttholes.

I turned to Gerwick and said, loud enough so Britny could hear me, “I’m done with this guy. I’m gonna tell him to piss off.” But Britny was oblivious—or was at least pretending to be, so I looked him in the eye and said, “It’s time for you to go.”

When Britny lolled around for another minute or so, panting obscenely and cackling for drugs, my manager put the hammer down. “Dude. Go. Now,” he barked. But Britny was in his own little world, muttering into his Heineken and picking his nose. My manager proceeded to have him escorted out by the seven-foot bouncer.

When we left the bar a few minutes later, Britny was slumped over in the alley next door with a dark stain on the front of his pants.


This bullshit originally appeared in the November 2005 issue of Decibel magazine.
Posted by bennett at 1:42 PM 1 comment: