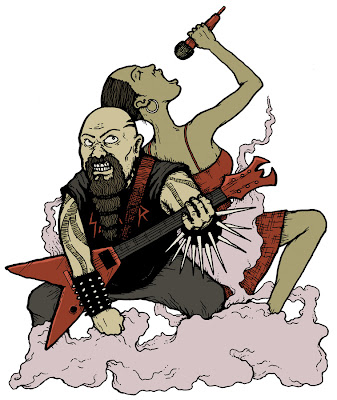 We thought the final nail had been driven into Metallica’s jewel-encrusted coffin a long time ago, but when they announced their forthcoming album collaboration with Lou Reed, it became clear that we’d need a bigger hammer. And a shitload of extra nails. Unfortunately, certain veteran thrashers have apparently caught the latest mental illness that Lars and the boys seem to be suffering from. It’s like syphilis in that it starts with an ill-advised coupling followed by a hasty exchange of fluids and ends in severe delusions, painful lesions, and sadness.

Slayer & Sade – (This Is) No Ordinary Reign

Emboldened by their successful collaboration with Ice T on the Judgment Night soundtrack, Kerry King and company up the ante by cutting an album with the ’80s R&B nightingale who purred America to sleep at night with ubiquitous hits like “Smooth Operator” and “The Sweetest Taboo.” The unholy deal was sealed when Tom Araya rang up the British-Nigerian songstress after hearing that she covered a Thin Lizzy song during one of her concerts earlier this year. As it turns out, Sade is a massive Slayer fan who thinks Seasons In The Abyss is the band’s finest hour. “I never understood why Reign In Blood is the one that everybody sweats,” she recently told Decibel. “I mean, ‘Dead Skin Mask’ is the fucking tits, am I wrong?”

For once, MegaDave beats his old bandmates to the limp-wristed punch by finding someone even more lame to work with than Lou Reed. What started as a duet of “Running On Empty” –eventually discarded for the severely under-appreciated “Somebody’s Baby” from the Fast Times At Ridgemont High soundtrack—turned into a 78-minute full-length featuring a guest shot from Glenn Frey, 400 cases of red wine, and a long-lost piano track contributed by the estate of the late, great Warren Zevon. Suck on THAT, Lars!

Though their work with Public Enemy on “Bring Tha Noize” resulted in one of the few rap-rock unions that doesn’t completely blow dead dogs for quarters, Anthrax never could leave well enough alone. Or pass up the opportunity to work with The Loaf, especially now that Scott Ian is having a kid with his daughter. (Meat Loaf’s daughter, that is—not his own daughter. That would be fucked up.) Unsurprisingly, the band’s collabo with the artist formerly known as Marvin Lee Aday on “Paradise By The Dashboard Light” is third-rate and tepid when compared to similarly bloated AOR hits covered by the rest of the Big Four. Plus, Joey Belladonna totally butchers all of Ellen Foley’s lines.

Inspired and invigorated by one too many midnight viewings of Two-Lane Blacktop, Chuck Billy decided to find out just how boring a James Taylor concert could really be. The answer? Really, really fucking boring. And yet it didn’t stop him from getting shitfaced on wine spritzers and singing along to “How Sweet It Is (To Be Loved By You)” with all the semi-retired investment bankers and their summer-cottage mistresses. Billy even braved the lactating throng of 60-year old dental hygienists to sneak backstage and meet Taylor in person. Their conversation—and impromptu renditions of “The Star-Spangled Banner,” Taylor’s “Fire and Rain” and Testament’s “Return To Serenity”—were surreptitiously recorded by a member of Taylor’s road crew, who reportedly sold the mp3 files to “the Internet” for “big, big money.”

This bullshit originally appeared in the September 2011 issue of Decibel magazine.