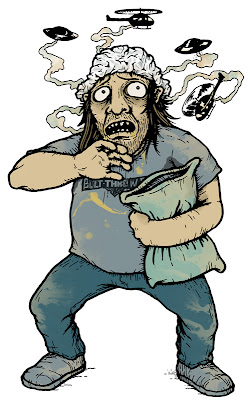 Is it my turn to hold the talking pillow now? Great. Let me just suggest you take these next few moments to calm the fuck down already. Take a deep breath. Find your center, say your mantra, do whatever Ram Dass shit you need to do to pull it together. Because I think you’re gonna stroke out if you keep at it like this, Jeff. All this stuff you’re blabbering about, day in, day out—the black helicopters, the Philadelphia Experiment, the guitar-solo bonus disc from Formulas Fatal To The Flesh—nobody gives a shit, okay? You just sound like a crazy person when you talk like that. A crazy person with enormous pit stains and mustard on his shirt. Just change that thing, okay? We all know that Bolt Thrower is your favorite band. We’re your friends, remember?

Look, a wise man once said that human beings are completely unreliable because their entire DNA regenerates itself every few years. Makes sense, right? So why are you so surprised that Debbie split? Or do you think it could have something to do with, I don’t know, all this flying fucking saucer shit? Or the Morbid Angel bonus disc routine? Dude, that shit is not dinner music. I don’t know how many times I have to tell you that before it sinks into that obscenely thick, greasy skull of yours. Also, you should think about washing your hair. That could be another reason right there. I mean, dude. Gross.

Another thing we should probably discuss: This house is not haunted, okay? No, no, let me finish—I have the talking pillow—I don’t care what Maud or anyone else told you. I know you think you heard a voice or something like that. Fine—voices. The place was built in 1933. It creaks, alright? You know this. Just forget whatever you heard about the little girl—the alleged little girl—who allegedly fell down the stairs in the ’50s and allegedly broke her neck. She wasn’t moaning. Or calling you for help. You had too much to drink, end of story. You know how you get when you do shots. And that other thing? That other thing was just Randy fucking with you. He was pressing your buttons, man. Yeah, yeah, I know: “Plausible deniability.” Whatever.

I think what it comes down to is, you watch too many of those conspiracy theory movies. All that shit about the Bilderbergers and fluoride and chemtrails is turning your brain into oatmeal. Okay, okay, so the shit about 9/11 is probably true. That’s one thing out of… too many, Jeff. And that’s my point, dude. You’re on overload. Unemployed and way over-stimulated. So, look, I cancelled the cable, alright? That’s step one in terms of getting things down to a dull roar around here. I don’t know what to do about the goddamn Internet though, buddy. Maud needs it for the email, and we can’t realistically expect to go all Chinese government on you with that one. So I’m just asking you to take it easy, okay? Go outside, get some fresh air. I don’t know; take up bird watching or some shit. Because honestly, I think I speak for all of us here when I say that you’re working our last nerve.

Okay, buddy. I’m gonna hand you the talking pillow in a second here so you can say your piece. I just want you to know that we’re all just trying to look out for you. We’re here to help, you know? Like, remember that time that Maud’s schnauzer—what was his name? Basil? Yeah, Sir Basil Rathbone—right. Remember when Sir Basil Rathbone fell into the pool and you were the only one who saw it happen and you ran over and saved him from drowning? That’s what we’re doing here. We’re trying to save you from drowning. We love you, man. We just wanna help you work through this. Together.


This bullshit originally appeared in the April 2011 issue of Decibel magazine.
Posted by bennett at 5:07 PM No comments: