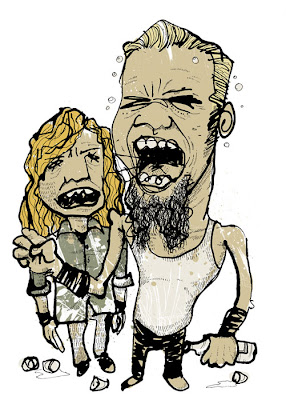 Unused Audio Commentary By Dave Mustaine and James Hetfield, Recorded Summer 2004, For The Some Kind Of Monster DVD

Mustaine: Chin-chin, Jimmy. [Both men down their shots] Excellent choice, by the way. Gold Symphony was always my favorite Russian—you know, back in my drinkin’ days.

Hetfield: Yeah, mine, too. I can’t keep any of this stuff in the house anymore, though. Francesca would shit a brick.

Mustaine: I hear you. It’s the same way at my place. Do you ever eat the gold leaf?

Hetfield: Hell yeah. I bet I’ve got a 23-carat liver by now.

Mustaine: Fuck, I think I’m gonna need another shot before we start here. That scene with Lars and me is tough to sit through.

Mustaine: Cheers, Jimmy. [Both down their shots] Oh, hey—I meant to ask you about that hot-rod I saw out in the parking lot…the one with the “Jaymz” vanity plate. Is that thing street legal?

Hetfield: [Laughs] Well, technically, no. But all the highway cops know me. As long as I don’t take it up over 80, it’s cool. Every once in a while, I’ll get pulled over by a new guy who doesn’t know the drill, but once he recognizes me, I’ll usually just sign an autograph for him and be on my way.

Mustaine: Nice, nice … Look, Jimmy, I gotta be honest. The real reason I came down here today is because I wanna convince you guys not to use that footage of me all crying and shit. I asked Lars, but he’s being a real prick about it. Can you do me a solid here, or what?

Hetfield: Yeah, Lars is pissed at you, man. He said that you called him your “little Danish friend” on camera… [Laughs] Did you really say that? [Pours two more shots]

Mustaine: [Laughs] I’ll drink to that. [Both down their shots] Fuck, man—I can’t even remember the last time I did three shots of vodka.

Hetfield: That’s probably because it was more like 20, with a heroin chaser. [Pours two more shots]

Mustaine: [Laughs] You’re telling me. [Both down their shots] Well, I guess we should probably fire this thing up here. I’ve got band practice tonight. You got the remote?

Hetfield: No, I thought you had it.

Mustaine: Nope. I’m feeling a little tipsy, though, to tell you the truth. I feel like I need some sort of pick-me-up … do you, uh … have any coke by any chance?

Hetfield: I knew you were gonna say that! [Laughs] Lars owes me 500 bucks! [Laughs] But no, I don’t have any. Francesca deleted my dude’s number from my phone.

Mustaine: No worries—I’ll call my dude.

[An hour passes. The sound of empty vodka bottles rolling on the floor is punctuated by snorting, sniffling, and half-decipherable torrents of inane conversation. Finally, the whole thing devolves into an argument.]

Mustaine: Fuck you! I hate you guys! You ruined my life!

Hetfield: Look, Dave, we’ve been through this a million fucking times with you, man…and… uh… fuck…I lost my train of thought here … Wait, can I get your dude’s number?

Many thanks to Jeff Alexander and Tom Bissell for the inspiration. This bullshit originally appeared in the May 2008 issue of Decibel magazine.

Posted by bennett at 8:17 PM No comments: