Montreal Scene Report: Get Your HAD On 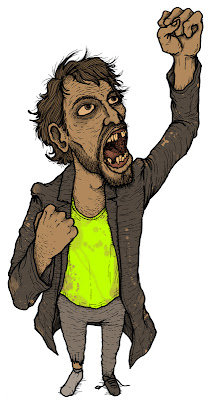 As you know, we here at Decibel magazine pride ourselves on our ability to bring you the latest and greatest in extreme underground metal stylings. In that spirit, we offer the following Montreal scene report from our intrepid reporter and comrade, J. Bennett. Doctor Bennett filed this report while still in Montreal, that sparkling city by the bay (ocean? lake?) from which he has yet to return. We fear his “full immersion” style of journalism has compelled him to join some of the vagabonds profiled in this piece.

Outside the Mont Royal metro stop, Crazy Henri shakes his dirty fists at the heavens and curses the god that has forsaken him. The noise coming from his mouth sounds like a dying whale being fed into a wood chipper by an army of smelly homeless dudes suffering from the DTs. That’s probably because Crazy Henri is a smelly homeless dude suffering from the DTs, right down to the green teeth and semen-encrusted pantaloons. But our man isn’t feeding a dying whale into a wood chipper. He can’t even afford a wood chipper. Luckily, the hot new music genre Crazy Henri is credited with inventing is totally and completely free—despite the fact that you can’t yet steal it off the Internet.

Yes, the latest extreme metal craze currently sweeping the rues of Montreal is called homeless a cappella doom—that’s HAD for short—and it sounds a little something like this:

That’s right, oh faithful readers. No shredding solos, tasty riffing or thunderous blastbeats required. This shit is au naturel, from Crazy Henri’s armpit-microphone to Allah’s uncaring ears. And what began just a few months ago as one unspeakably horrible-smelling human being throwing down the doom—homeless a cappella doom—outside of Who Wants A Crepe? can now be found panhandling in the entryway of nearly every Couche Tard convenience store in this magical quasi-European burg. Today, Crazy Henri enjoys godfather status in the HAD scene. Later this week, he’ll open for local punkers Vaginal Croutons at Les Foufounes Electriques, a.k.a. the Electric Asshole, over on Saint Catherine.

Meanwhile, the occasionally deflated but always hilarious junkies on Saint Laurent congregate in the parking lot behind Club Soda in hopes of catching an impromptu performance by Monique LeTrec, otherwise known as The Sea Hag. Rumor has it she washed up on the beach back in ’03 after fleeing Newfoundland on a raft made out of balsa wood and fish heads. But today she’s the gin-blossomed Bonnie to Crazy Henri’s shitfaced Clyde: The doom-loving duo often go dumpster diving together in the alleys behind Montreal’s most glamorous jack shacks.

Of course, where the smoke from a burgeoning musical trend befouls the local air, the firemen of opportunity always come calling with lighter fluid and recording contracts. Pierre “Peaches” Benoit, a longtime HAD supporter and part-time social worker, is one of these soul-sucking carpetbaggers. But he agrees to meet us for a drink upstairs at Pussy Corps, so we let him run through his talking points. “Homelessness is not a joke, and with a decent push from a big label like Warner Brothers, homeless a cappella doom won’t be one for much longer,” he insists. In a nod to local custom, Benoit arrives at our meeting in typical Quebecois summer garb: baggy three-quarter length cargo pants (white), a bright neon tank top and a moldy pair of burlap man-sandals. “Plus, I read the first half of Nick Flynn’s Another Bullshit Night In Suck City last year, so I know what I’m doing when it comes to dealing with these artists.”

Benoit’s first cash-in is a HAD compilation called Get The Fuck Off My Car, Creep—a re-appropriation, he says, of an epithet often hurled at many of the compilation’s contributors in between street performances. An advance copy of the track listing reveals that Crazy Henri recorded at least two songs for the collection, including his hits “I Got Arrested For Public Urination (Again)” and “Brown Bag Blues,” while the Sea Hag delivers her asphalt anthem “Olde English Lover” and a doomed-out cover of “These Boots Are Made For Walkin’” Elsewhere, newcomer Gilles L’espalier chimes in with “URRRGGGHHHHH!” and “I Needs A Dollar For The Muthafuckin’ ,” a local buzz track that fuses HAD with London-style grime rap.

“I don’t know about you,” Benoit says as his halitosis nearly knocks us off our barstool. “But I think this shit could be huge.”

This bullshit originally appeared in the September 2010 issue of Decibel magazine.