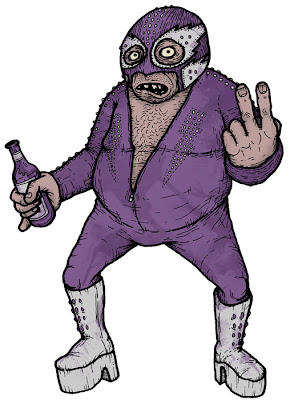 Christmas infuriates me in a thousand different ways, but mostly because Mum gives my brother Lightning Rod all the best gifts. This year he got an iPhone and one of those ’lectronic readers wot let you get the Times paperless-like. She give me a Lucha libre mask and a carton of ciggies again this year, which only proves that she has never understood me or my refined sense of aesthetics. After presents, I went to my room and listened to Slade’s “Merry Xmas Everybody” over and over again on my old Hello Kitty 45 player. Then Dad busted in without knocking. Again. “Quit sulking,” he tells us. “It doesn’t become you.” What he means is: “You get free room and board here, innit? So don’t act all pissy when your stocking comes up light.”

Back when I was in Samson, I didn’t have to put up with this shite. I was king of the neighborhood in them days, lead drummer for one of the most popular NWOBHM bands in the land. We opened for Robin Fucking Trower at the Hammersmith Odeon in 1980, don’t forget. AND I WAS THE SECOND-EVER DRUMMER FOR IRON MAIDEN FOR FUCK’S SAKE. Lightning Rod used to follow me around like a wee puppy back then. He wouldn’t even be called Lightning Rod if it weren’t for me giving him the nickname as encouragement, like. He would be just plain old Clive Graham, assistant to the assistant of the vice president of the local council estate. But I’d still be Thunderstick, even though Bruce Dickinson won’t return my calls. Alas, I guess nobody gives a toss anymore. Not even me own Mum.

Christmas supper is awkward, as usual. Mum’s half in the bag by 3 o’clock, and Dad’s well on his way. Meanwhile, Lightning Rod keeps looking things up on his iPhone just to annoy me. “According to Wikipedia, Blackpool is the fourth most densely populated district of England and Wales outside of London,” he informs us with a giant shit-eating grin. “Isn’t that where your old drum kit washed ashore after you tried to give it a proper Viking funeral in Troon?” When I fail to react, he starts downloading fart apps and working them relentlessly, occasionally chiming in with his own not-so-virtual contributions. Our idiot cousins are in stitches, of course, but he’s really starting to get on my tits.

I spend the rest of the evening resisting the urge to throttle him into oblivion while all the aunts and uncles fall asleep in front of the telly. I picture my hands wrapping around his soft white throat, thumbs pressed firmly on the Adam’s apple, fingers squeezing the carotid artery like one of those grippers with the plastic handles that I used to nick from the gymnasium. His eyes bulge from their sockets as his face slowly turns purple. I can see his blood vessels and, like, capillaries starting to burst. Sputtering like the mental midget he is, he grasps at the air for help that never comes. And then I punch his fucking card, once and for all. Free at last, it seems! Free at last!

But mostly I just bide my time, watching the clock until that magic hour when I can go down the pub, have a pint or twelve, and wear my new rhinestone mask in peace. Occasionally, some of the boys from Fist or Praying Mantis turn up and we have a laugh. Inevitably, someone will put Maiden on the jukebox and I’ll have to open up that someone’s face up with a left cross. At which point I will be politely asked to leave. At which point I will probably tell everyone in the pub to fuck off. At which point I will be escorted out by Terry, the bouncer and my old mate from primary school. At which point I will stumble home, only to find Lightning Rod giggling like an idiot, probably watching that Shaker Weight video on his iPhone for the three hundredth time.

Like I said, Christmas infuriates me in a thousand different ways.

This bullshit originally appeared in the March 2011 issue of Decibel magazine.
Posted by bennett at 2:23 PM No comments: