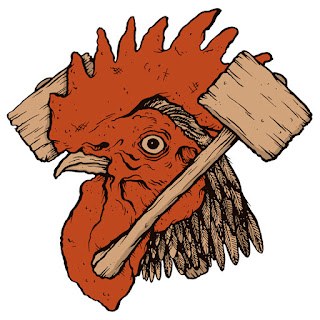 Rossignol’s curious, albeit simply titled book, the Origins of a World War, spoke in terms of secret treaties, drawn up between the Ambassadors from Plutonia and Desdinova the foreign minister. These treaties founded a secret science from the stars. Astronomy. The career of evil.

To the endless soundtrack of Burzum’s Filosofem, Randy considered his fate. He’d been up all night reading conspiracy theories. Again. His latest was a scintillating thrift-store paperback entitled Satan’s Assassins. Its front and back covers touted its vast inner wealth: “Thoroughly documented! All fact! Earthshaking evidence for a bold new theory: that history’s most notorious slayers have been controlled by the Occult...the only book that dares to suggest that a power from beyond may be dictating the murders of our public figures... and offers history’s documents to prove it... by internationally known experts on the occult.”

A quick Google search revealed that Jay Garon was—probably—the literary agent who would later become famous for being only guy in the universe who called the phone number at the top of an unsolicited manuscript by an aspiring novelist named John Grisham. After adaptations of Grisham’s bestselling legal thrillers—The Firm, The Client, The Pelican Brief—hit the bright lights and big titties of Hollywood, Garon would, according to his obituary in the Baltimore Sun, “regularly negotiate multimillion-dollar movie rights for books Mr. Grisham hadn’t written yet.”

It all made perfect sense. To Randy, anyway. And Randy was one of those people for whom the dots always connected, even when they didn’t. Satan’s Assassins asserted, basically, that Charles Manson, Lee Harvey Oswald, Sirhan Sirhan, Ramón Mercader (Leon Trotsky’s assassin), Chuck Guiteau (President James Garfield’s assassin) and other similarly positioned villains and/or patsies were the automatic agents of Satan. Well, duh.  In Randy’s world, both public figures and anonymous everymen sold their souls to the devil on a regular basis. These transactions were in no way figurative or metaphorical. These people spoke, out loud, with Lucifer himself. Hasty, often desperate negotiations took place. Concessions were made. Deals were cut. It was a routine exchange, like buying a loaf of bread. And that’s exactly why nobody in a position to expose the phenomenon—journalists, the government, academics, NASA—gave it a second thought. In fact, most of them had probably sold their own souls long ago. It was a closed circuit, a never-ending wheel.

Fuck them anyway, Randy thought. I’m keeping my soul no matter how bad shit gets. Even when the 9000-pound cock-hammer drops. And by Randy’s watch, the 9000-pound cock-hammer was due to drop any second. This is 2012, after all. The Mayans knew what was up. None of their prophecies were in any way bullshit or the result of sunstroke or some delayed after-effect of whatever mysterious herbs they were ingesting. No way.

Randy started jacking it three times a day. By his count, he successfully embarked on at least one psychic voyage every few months. As a result, he’d seen a few things. Like the signing of the Magna Carta. Like the moon landing (which took place on a soundstage in Newark, just as he suspected). Like his own grandfather being conceived in an outhouse in Nebraska. Randy was also pretty sure he’d spoken at length with Carlos Castaneda somewhere in the Fifth Dimension. Or at least his soul had talked at a shadow that vaguely resembled Castaneda’s profile. At one point, Randy felt he had projected himself into the day room at Pleasant Valley State Prison and smoked weed with Sirhan Sirhan.

It was all part of what Randy understood as a collective consciousness. A lattice of coincidence. Satan’s Assassins was just another brick in the wall between himself and those who couldn’t or wouldn’t comprehend. Which was totally fine. There was no doubt in Randy’s mind who would prevail—who would achieve total consciousness—and who would languish in the stale, dark corners of perception. His path was clear: Onwards, upwards, astrally and forever. Or at least until the cock-hammer drops.

This bullshit originally appeared in the June 2012 issue of Decibel magazine.

Posted by bennett at 4:37 PM No comments: