The Ballad Of Valdas Paskas 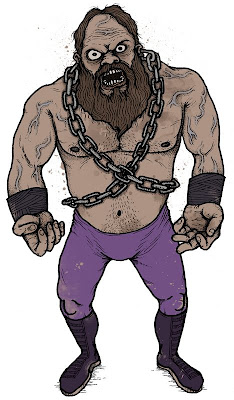 What can The Dominator tell us about the fading star of celebrity? Not much, we’d imagine. By the early ’90s, he’d lost the ability to speak. That was the official story, anyway. His ex-wives thought it was a ploy to avoid unpleasant questions—from journalists, ostensibly, but most likely from the ex-wives themselves. He put himself to pasture a long time ago, they’d say. “How far the great have fallen,” and other such well-worn platitudes typical of the speaker’s own fleeting devotion. But they had a point.

As heavy metal heroes go, you couldn’t get much heavier or heroic than Valdas “The Dominator” Paskas. In his prime, he stood 6-foot-7 and weighed 375 pounds. As a teenager in his native , he reportedly punched out a mountain lion and then impregnated the beast as it lay unconscious. (To this day, rumors persist of a half-man/half-lion terrorizing weary in the hills near the border.) As the lead singer for Face Violator, he was an intimidating stage presence, wearing thick industrial chains across his chest in the He-Man style and often hoisting guitarist Ricky “Pete” Damone and bassist Ron Rager onto his shoulders while taunting the audience with horrifying promises of a “severe backdoor delivery.” Toward the end of Face Violator’s career, it was widely reported that The Dominator had attempted to “” Rager by threatening to push the band’s touring van (they hadn’t traveled in a bus for years) onto the bassist at a gas station somewhere near . No one present doubted he could do it.

Face Violator got their first break opening for Grand Funk in 1975, on that band’s decidedly bloated All The Girls In The World Beware!!! tour. To audiences across , it was an obvious mismatch. Grand Funk’s waning “Some Kind Of Wonderful” mid-period performances were decidedly ineffectual after Face Violator’s delirious proto-grind had punished them so thoroughly. As The Dominator himself later pointed out, Face Violator had made Grand Funk look like “a buncha weepy teenage split-tails."

The band enjoyed steady popularity in the throughout the late ’70s and early ’80s, playing alongside the likes of Motörhead, Venom, and Tygers Of Pan Tang. In 1981, the editors at Sounds tried to arrange a charity boxing match between The Dominator and Samson drummer Barry “Thunderstick” Purkis, but it fell through when The Dominator attacked three constables during a race riot in and subsequently spent three nights in a Brixton jail.

In early ’84, Face Violator famously opened for Sabbath on the Born Again tour, which was more or less the beginning of the end. After joining Sabbath onstage for “Zero The Hero” in , The Dominator had words with Ian Gillian backstage and reportedly told the former Deep Purple lung-smith to “huff my sweaty bag, fat boy.” Face Violator were unceremoniously booted off the tour and replaced by Sabbath guitarist Tony Iommi’s then-girlfriend, Lita Ford.

Face Violator broke up in early ’87, after The Dominator caught Damone and Rager in bed together. (They refused to let him join in.) Ruined by the scandal, the duo never worked again. Though clearly deteriorated in the eyes of the public, The Dominator remained viable. As his contemporaries were busy drinking and whoring themselves to death, he did squat-thrusts at the Y and quietly plotted his revenge. Later that year, he landed a bit part as an SS officer in Roger Corman’s little-seen Nazi boot-camp flick, Iron Youth. (As Corman tells it, The Dominator demanded that his costume be made by of SS uniforms, Hugo Boss.) The Dominator’s first solo album, Painful Insertion (1987), was bolstered by the modest hit, “I’m Gonna Make You My Reverse Cowgirl,” though many claim the songs were actually written by then-Whitesnake guitarist John Sykes, who still turns pale(r) when he hears The Dominator’s name.

By ’89, The Dominator’s mental state had become increasingly unstable. Some said it was dementia, others claimed a bipolar disorder was exacerbating his already semi-acute Frotteurism. Whatever his affliction, he was clearly out of step with the fans’ prevailing tastes. His second solo album, China Sideways, was greeted with the kind of enthusiasm that usually accompanies a particularly noxious dog fart, and The Dominator quickly went to seed. He ballooned to 500 pounds and cultivated an extensive chin collection before fleeing to , where whisperings of drug abuse and Thai pool boys persist to this day.

When contacted via email for comment on his activities of the last 20 years, The Dominator simply replied, “What’s Decibel?”

This bullshit originally appeared in the June 2010 issue of Decibel magazine.