A Night At The Toolbox 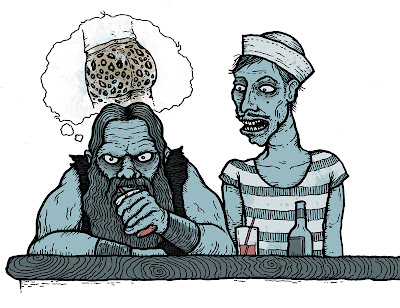 Valdas Paskas was doing his usual Tuesday night thing down at the Toolbox in Pembroke Pines, watching the sailor boys dance and listening to Slayer. He sipped his cranberry-and-soda and contemplated the unnerving events of the past week: the mysterious hang-up calls from unlisted numbers; the unmarked Crown Vic idling across the street from his chalet at all hours; the sudden freezing of his money-market account at the credit union in Davie; the notion that, though he wasn’t getting any richer, he certainly didn’t seem to be getting any younger. Also, the general feeling of malaise and perpetual exhaustion that seemed to embrace him like the folds of a wet ham that was about to be nuked gray and served for dinner with a side of powered potatoes and a hot glass of Tang.

Yes, it was clear that the ex-wives were closing in on him.

Just the thought of them made Valdas push his cranberry-and-soda aside and think about ordering a vodka. He couldn’t even concentrate on the smooth adolescent lines of the gyrating daisy boys, so unpleasant was the notion that he might have to speak with one of the shrill sows he had once been married to. He desperately wanted to order a vodka. Just one shot to dull the fear, the shrieking, the feelings of helplessness. No, he would hold fast. He would remain strong. He would remember what his sponsor said: “You are attached to something in time and space. You are identifying with your body, your feelings, your thoughts, your thirst. Recite your mantra and the rest will all go by.”

Valdas’ sponsor had suggested the standard and ancient Buddhist mantra: Om mani padme hum. To recite it continuously, his sponsor said, would result in transcendence and ultimately enlightenment. Valdas had tried it, but the mantra didn’t work. He had devised his own mantra. Or rather, he had nicked it from Mike Tyson: Everybody has a plan until they get punched in the face. Granted, it was wordier and more awkward to recite than Om mani padme hum, but it also had more modern relevance, Valdas felt. The words themselves were wiser and more useful. Plus, they were in English—not Valdas’ native language, but certainly his second tongue. It was true, too: Everybody did have a plan until they got punched in the face.

Fifteen years ago, Valdas had had a plan: To get famous, get rich, and retire to Florida with his trusty Thai pool boys, Tonto, Zorro, and the Lone Ranger. He had even made it to South Beach and lived with all three of them in extramarital bliss for a brief and fleeting period. Then the money ran out. Or was stolen from him, rather, via unscrupulous and mean-spirited litigation instigated by the ex-wives. They just couldn’t stand to see him happy. Especially Zoya, with her leopard-print stretch pants, yippy little dog and never-ending chain of lipstick-stained Virginia Slims. She was the most vindictive of them all. She had turned the screws on Valdas—hard. It was the only way she knew how to do anything: Negotiation by hammer. When they had met as teenagers back in Lithuania, she was already the most formidable hog-trader in the entire countryside. Her enthusiasm for hostile bartering was one of the qualities that first attracted Valdas to her. That, and her unstoppable ass. But now her ability to back any opponent into a corner with a withering sneer and a few choice words was being used against him. She was probably banging the lawyer, too.

The more Valdas pondered it, the more his situation seemed hopeless. He knew what Sid would say. Sid, his faithful companion and personal trainer: Wise beyond his years, however old he was, and Valdas had never been quite sure of that. But he knew what his friend would say, and it would be this: “Reality is on the other side of the visible.” Easy for Sid to say, Valdas frowned. On the surface, it was just another mantra. But like Iron Mike’s surprisingly astute observation, it had merit. It was possible, wasn’t it, that Valdas had not considered all of the potential options in his recent dealings with Zoya and the other ex-wives? Indeed, what guarantee did he have that all the relevant facts and angles could be understood strictly through the five senses?

At that moment, the sultry grind of the dancing boys regained its fleshy allure. Valdas couldn’t be a full one hundred percent positive, but he could just about swear that the blond one had winked at him. Finally he ordered a vodka and swallowed it down with a smile. Tomorrow, he would call Zoya with the bad news.


This bullshit originally appeared in the June 2011 issue of Decibel magazine.
Posted by bennett at 5:47 PM 1 comment: