Midnight In The Garden Of Evil & Evil 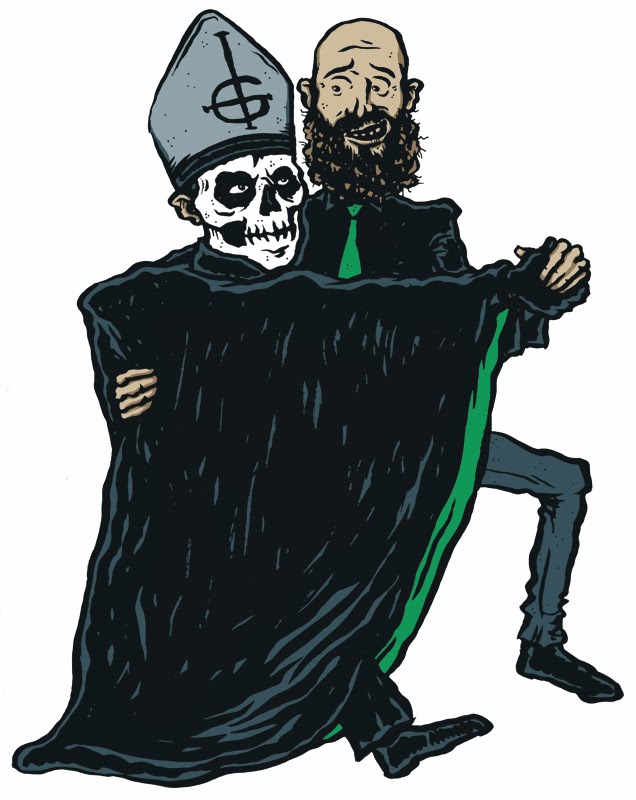 Clearly, the forces of evil are aligning against me. Or at least the forces of extreme inconvenience. They’re compelling me to do all kinds of things I’d never do in a million years if I didn’t, like, need the money to pay rent. Like Edgar Allan Poe, I meet doom and paranoia, black birds and white lightning, in every corner. I’m consumed by the idea that failure and poverty will team up to crush me like the Iron Sheik and Nikolai Volkoff launching off the top rope, arm in arm, to choke me out/strike me down/what-have-you with a double Russian sickle to the Adam’s apple. I’m up all night thinking, What the fuck am I doing with my life?  Or maybe I’m thinking about eating the shit out of a pulled pork sandwich because I went to bed without dinner again and my stomach is squealing like a stuck pig.  It doesn’t matter. What matters is, I can’t sleep.

Who ya gonna call?

We sit up late into the night, Papa and I, sipping red wine and contemplating the cosmos. Papa doesn’t say much, but he’s an excellent listener. He nods politely while I detail my hopes, dreams, and the vast conspiracy theories that I feel guide the trajectory of human history. Occasionally he shares a personal anecdote—that one time in the back of the hearse with Ghuleh, hooo daddy—or corrects a date I have misremembered. Yet I am convinced that he listens to two monologues simultaneously: My own and one that only he can hear. Perhaps it’s the voice of the serpent that spoke to Eve in the Garden of Eden way back when.  Maybe it’s the voice from the burning bush in Moses’ fabled mountaintop hallucination. Also, Papa might simply be schizophrenic. The jury is still out. Between the papal robes and the hail-Satan routine, it’s tough to say. One thing’s for sure: he is a seriously talented motherfucker.

Insightful, too: Papa tells me things in the night. He says Beelzebub is watching all of us, like some cloven-hoofed Santa, minus the reindeer and, like, beer gut. He knows who’s been naughty and who’s been nice. Doles out presents accordingly. The wrapping is what you might call non-traditional, but the gifts are timeless: Syphilis and the power of supreme oratory. Liver failure and killer riffs. Plagues and laser eyes. Dry heaves and hundred-dollar bills.

We’ve been on tour for nearly a month now. Ghost and Ides Of Gemini have come to an understanding. Many understandings, really, but the most important is this: Papa calls the shots. He is, how you say, the Big Kahuna. El Jefe, if you will. And even if you won’t. If Papa says we’re having rotisserie chicken for dinner, we’re each expected to eat an entire bird. Even the vegetarians. No running to the vomitorium like an anorexic sissy, either. Man up—even the women, he says—or burn alive for eternity in Lucifer’s fiery, swollen hellhole. Papa says this hellhole is not unlike the Sarlacc pit from Return Of The Jedi. Which, he is quick to point out, was based upon George Lucas’ paralyzing fear of Carrie Fisher’s vagina dentata. I have no idea if this shit is true, but one gets the feeling that Papa KNOWS THINGS. It’s unsettling, to say the least.

Obviously, we’re having chicken tonight. Maybe later Papa will whisper some sweet nothings in my ear so I can get some shuteye.

This bullshit originally appeared in the August 2013 issue of Decibel magazine.