You've Been Caught In A Laugh Riot 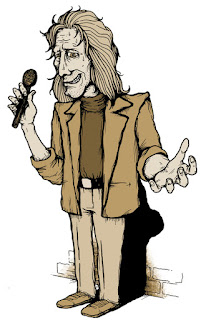 I just wanna begin by saying that it’s an honor to be here tonight at the Comedy Sack in Dubuque, where so many heavy metal comedy giants have graced the stage before me. I mean, wow. To think that right now I’m standing in the exact same spot where Chris Holmes, “Philthy” Phil Taylor and the really angry mustache dude from Mortician once busted guts? Amazing. Sensational. I can feel their aura of superb comic timing all around me, enveloping me like the folds of a warm va-jay-jay after a couple of Bacardi Breezes, thus fulfilling the two-drink minimum here at the Comedy Sack.  Thank you very much for having me. I’m just … wow. Okay, okay, I can see you’re eager for me to get this party started.

Okay, okay, so I forget how this one goes, but it starts with, “Four white guys walk into a bar…” and the punch line is “Metallica.” I know, I know: You’re thinking, “What about Robert Trujillo? Isn’t he…?” Yeah, I was thinking the same thing. But trust me, the joke is hilarious.

Okay, Okay, here’s another one: That Norwegian black metal dude, you know, the chubby one, he comes up me and goes, “Are you gonna finish that?” But before I can even figure out what he’s talking about (it’s chocolate cake), I punch him right in the balls. We all got a huge fucking belly laugh out of that one. See what I did there? Belly laugh? No?  Fuuuuuck. Tough room, dude.

Okay, okay, okay. I can see you’re running out of patience here. What about that other black metal dude, the one with the assault record and the gay boyfriend? What?  Too soon? Too insensitive? I wasn’t gonna make a gay joke. Just a joke about, you know, butt sex.  I figure butt sex is hilarious no matter who’s doing it. I mean, right?

Okay, okay, okay. So you’re one of those sensitive crust-punk types. You’ve got your homemade His Hero Is Gone patches sewn onto your fourth-hand Canadian military jacket, and I can see you’ve got Fido there on a rope. You’d probably get your panties in a bunch if I made a joke about showers or, like, soap. Especially dropping the soap in the shower. So I feel like my hands are tied here. Kinda like how you’ve got Fido on that rope. I feel like you’re jerking me around and giving me mange at the same time.

Okay, okay. I didn’t mean that. I swear. I’m just nervous ‘cause I really want the gig, you know? Did you ever see that old SNL skit, the one with Chris Farley and Patrick Swayze, and they’re at Chippendales auditions? That’s how I feel right now—fat and sweaty and shirtless. Only I’m not dead like those guys are… oh, c’mon! Too soon again? Those dudes have been gone for years now, man!

Okay, okay. You into grindcore?  Okay, what do you get when you cross a grindcore vocalist with, like, a pit bull?  Can you guess?  A pit bull that won’t shut up!  No? Seriously? Fuuuuck, dude. I mean, I know I’m not the next Rodney Dangerfield or anything, but this shit is gold. Okay, maybe not gold.  Oh, it’s like cobalt?  Comedy cobalt? That’s hilarious, dude.  Yeah, I mean, what do you need me for? Or anyone else for that matter?  You should do the whole show by yourself. Dick.

This bullshit originally appeared in the October 2011 issue of Decibel magazine.
Posted by bennett at 5:56 PM No comments: