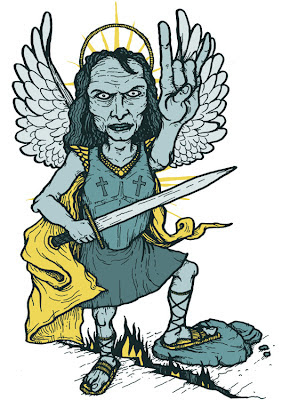 May you live in interesting times

Laruss Trumbo pointed his binoculars out the window of his office on the 13th floor and saw nothing but gray skies, empty streets, and fire. The first three plagues—blood, frogs and flies—had arrived according to schedule. He had been expecting the locusts since Thursday, but they had not materialized. He was not looking forward to the pestilence or the incurable boils. On top of this there was the slug problem: Giant, man-eating slugs.

He had been holed up in his office for nearly two weeks, living off of his personal stockpile of protein bars and the myriad foodstuffs he had managed to scavenge from the office cafeteria. As the massive carnivorous slugs trailed their hideous mucous across his beloved city, Trumbo read back issues of Everglades Enthusiast magazine and listened to Slayer’s Hell Awaits on repeat. He clung to the lingering hope that someone was still out there, and that that someone, whomever they might be, would rescue him before the incurable boils spread across his pasty flesh in hot carbuncles of purple, festering misery.

Laruss had not left his office since Monday, when in an attempt to make an end-run for the bathroom, he saw one of the slugs feeding on the inanimate corpse of his (former) co-worker Sawney Beane. Old Sawney’s eyeballs were rolled back in his head as if he were getting some perverse pleasure out of being slowly masticated by the gargantuan green mollusk while it secreted its viscid glaze all over what was left of his ruined forehead. Laruss couldn’t be sure if the slug had spotted him—or even if the repulsive creatures had eyes.

His last chance at freedom had come and gone when Lacey Underall had tried to pry open the revolving door for him just hours after the first plague struck. Somehow, she clambered over the heaving pile of co-workers clogging the building’s main entrance and made it outside. She stretched her thin arm back through the door in an attempt to hold a narrow opening for him, but the weight was too much. Her forearm snapped off below the elbow mere seconds before she was washed away in an ocean of blood.

Laruss felt in his pocket for Lacey’s Claddagh ring, which he had removed from her severed but still delicate hand. He remembered wistfully that the heart had been facing her fingertip. They had exchanged lingering glances in the elevator for months and even enjoyed a brief flirtation at the office Christmas party back in December. Of course, Laruss had never quite mustered up the courage to ask her out for a drink. And now… well, now it seemed like his window for relationship opportunities was closing fast. The inane prophecies of the sandwich-board crazies down on State Street had been shockingly accurate, right down to the self-aborting fetuses that now streaked the floors of St. Elizabeth’s maternity ward with a thick coat of gore.

It was Wednesday afternoon when the voice from the heating vent spoke to him. Laruss was stretched out on the floor, trying to sleep but really just sobbing softly to himself. At first, he thought he was hallucinating. His food reserves had become increasingly sparse, so he had been steeling himself for this phase of the starvation process. The voice began by whispering incoherently under its breath, punctuating each stream of gibberish with an exceptionally forceful “Look out!” Eventually, it addressed him directly.

“Trumboooooow,” the voice hissed. “Help us, Trumboooooow. You are the only one capable of making these adjustments.”

Laruss ignored the voice. There was no way this was actually happening to him in real life. Not like the blood and the flies and the… giant man-eating slugs. Okay, fine: “Leave me alone,” he ventured, covering his eyes with the crook of his arm. “Go away.”

“Don’t leave us here, Trumboooow. We need you.”

“No one needs me anymore,” Laruss sniffled. “Everybody’s dead.”

He turned to face the vent: “Who are you, anyway?”

“I think you know, Trumboooow.”

Laruss yanked his trusty Leatherman out of his briefcase and unscrewed the grating from the wall. Once removed, he peered into infinite blackness. Slowly, he reached into the opening. “Hello? Ronnie?”

His arm followed, until it was in up to the shoulder. He grabbed fistfuls of stale air in every direction. “Ronnie?”

Laruss stuck his head through the opening, followed by the other arm. He couldn’t see an inch in front of his face. He heard a strange howling sound somewhere below him. And, like, a bass line. A very familiar bass line.

Laruss turned toward the sound and found himself upright in total darkness. He grasped for a handhold, but could find nothing. He wasn’t even sure if there was ground beneath his feet. “Ronnie?”

The white light that Laruss had suspected was coming finally came. It was small at first, but grew slowly as it approached. In it, he could make out a figure walking toward him, a small figure carrying what looked like a sword. Laruss reached into his pocket and felt for the Claddagh ring. It was still there. Calmly, he walked toward the light.

This bullshit originally appeared in the August 2011 issue of Decibel magazine.
Posted by bennett at 4:03 PM No comments: