Czech Out Time Is Now 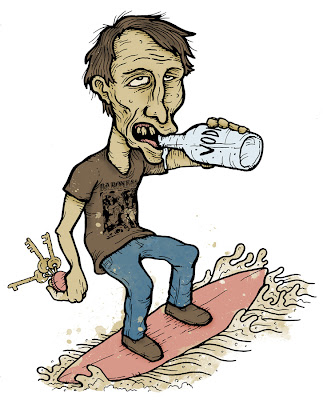 In Brno, the streets run fluorescent yellow with last night’s drunken pee, those untold gallons of Red Bull & vodka hastily consumed and just as hastily evacuated, like God’s own water (40%abl) back when Noah built the Big Boat. By all indications, Brno is the Czech Republic’s version of a college town, and—according to the Internet and our trusty driver/tour manager/German translator Roland “I Make Zee Business Now” Bergner—the second-largest city in the country. Decibel is here because we’re rolling with Black Math Horseman on their triumphant 2010 US tour, rescheduled for 2011 due to last year’s Icelandic volcanothatcannotbenamed. Which makes it April 6, 2011, to be exact.

When we first pull up to the Melodka and eyeball the mural of cartoon hockey players on the façade and the gaggle of small children in actual hockey pads gunning down butts, Soviet style, out front, we’re convinced that the band would be playing a very large, very cold room with Plexiglass walls. As it turns out, the bottom floor of the Melodka is a hockey-themed diner, which is a phenomenon Decibel had never even contemplated in our wildest nightmares, much less encountered in real life. The upstairs bar/venue is separated from the diner by an excessively steep flight of stairs and a metal security gate that opens via electronic buzzer, pawnshop-style, by an especially bored-looking power-slag with magenta hair huffing roll-your-owns by the bar.

Outside, the poster for the show proclaims that Black Math Horseman play “in the style of Tool and Isis.” We all share a hearty group chuckle at that one, but Decibel secretly admires the promoter’s ability to do his job and be completely full of shit at the same time. Which pretty much sums up the dude’s entire work ethic when he turns up to greet us, all five-foot-nothing of him in a Baroness Blue Record t-shirt. But his English is way better than our Czech and he’s secured almost everything on the band’s rider, so his weasel-like nature goes largely ignored for the time being. He even pays BMH in advance, which turns out to be a tacit admission of just how totally fucking hammered and rip-roaring high he plans on getting later in the night.

Despite their absolutely terrible name, local openers Five Seconds To Leave turn out to be surprisingly awesome. And then Black Math play their finest show of the tour thus far while debuting the moody, apocalyptic visuals vocalist/bassist Sera Timms assembled for the band’s upcoming appearance at Roadburn. After the show, the promoter clinks his glass with a soup spoon and addresses the whole bar with a brief but triumphant speech in Czech that everyone seems to approve of. Later on, backstage and shitfaced, he tells Black Math they were better than when he saw Tool in Prague that one time.

And then the trouble starts.

At the beginning of the night, the promoter had handed Roland three sets of keys on pink plastic keychains, each to a room at a supposedly nearby hostel where the six of us—band, Decibel and Roland—were to stay that night. What he hadn’t done is told us how to get there. And by the time he finished slurring in two languages about how he could never listen to Tool again, he was in no shape to offer coherent directions to the Melodka’s bar, much less the hostel. So Roland does the natural thing and asks him to walk us there. But the promoter straight up refuses, says he’s too drunk and that it’s easy to get there, and that we just need to go up the block and take a right and a left and a right. Only he points left when he says right and points straight when he says left. By now it’s nearly 3AM and we’re out in front of the club. The promoter is surrounded by his boys, who are clearly wishing that the pesky Americans would piss off so they and their promoter friend can all keep pouring beers into their faces elsewhere. (As it turns out, some of the bars in Brno never close, ever.)

This is when Decibel decides to implement our time-honored behavior modification program in which we express—through nothing more than a calm tone of voice, the placing of hands firmly on the promoter’s slumped shoulders, and severely direct eye contact—that he really should walk us to the hostel, since we’re from out of town and all and he really wouldn’t want us to get lost and/or accosted by the local criminal element, would he? At which point our man finally relents, sloughing off into the Brno night with us while his shitty brosephs shout Czech epithets that none of us fail to understand.

So begins the long, brutally silent walk toward what we assume is the hostel. For a brief moment, it occurs to Decibel that our new friend might point us down a decidedly unfriendly alley in which we might be beaten, raped and relieved of our internal organs. But instead he leads us to a dingy hangover palace with no running water and a hooker bar on the bottom floor, the kind of steaming hot-sheet shit-hole that typically rents rooms in 15-minute blocks. And surprise, surprise: the keys he gave us actually work. We bed down fully clothed and armed to the teeth, humming “Sweet Chariot” until the Brno dawn finally consumes us.

This bullshit originally appeared in the July 2011 issue of Decibel magazine.

Posted by bennett at 7:26 PM No comments: