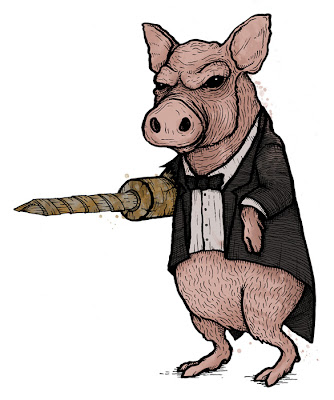 Okay, so I had this dream the other night, dude. It was kinda fucked up. At first, it was totally cool, like one of those recurring deals I have about Becky Griswold, where we’re in the bushes behind the armory and she’s giving me the business, real sloppy and nasty-like. Only we’re not in the bushes and instead of Becky Griswold it’s the dudes from Pig Destroyer and there’s no business going on anywhere. So right off the bat it’s a total bummer. But it gets worse, dude. Much worse. These dudes, they’re after me for some reason. And they’re all armed to the tits. But instead of like regular weapons they’ve got these fucking mechanical arms with huge pincer grips and C-clamps and massive rusty drill bits like the one going up that dude’s ass on the cover of ’s Far Beyond Driven. You know—, uncensored cover. Before they pussed out and changed it to that stupid blue skull thing.

Anyway, I suddenly realize—in my dream, that is—that the dudes from Pig Destroyer wanna use that massive rusty drill bit on ME in much the same way used it before they pussed out. As in, NOT FUN AT ALL, dude. And I’m not positive what I’m thinking in my dream as far as the pincers and C-clamps go, but I’m pretty sure it involves something terrible and irreparable being done to my genitals. Like I get the feeling the whole general package area is in severe jeopardy. Horrifying, right? I’m not sure if this was one of those Freudian sexual inadequacy deals, or what, but that’s not really what I was concerned about at the time, you know? I was concerned about getting the fuck out of there as fast as fucking possible. So I do what anyone would do—I haul tits, dude. I run like I’ve never run before, like the dude from Chariots Of Fire. Like all jacked up on muscle juice in 1984. Like Forrest Fucking Gump, dude. The word “fleeing” comes to mind, because that’s what I was doing. I was fleeing. For the safety and preservation of my package.

So I’m hauling balls, literally and figuratively. Through a field. Through a stream. Waist-deep in water. When I’m in the drink, I’m thinking about eels and piranhas and those creepy things with the stingers that killed that Australian dude on the TV. Oh, and candirú, dude. Are you familiar with these aberrations of nature? Totally vicious little fuckers, they swim up your dick hole when you blow a piss and lodge themselves in your urethra with these little spikes that they have. Think about THAT for a second, dude: Dick parasites. I guess they only exist in the Amazon, but I’m not exactly sure where this dream is taking place. Then, after the stream, I come to a bridge, and there’s bodies hanging everywhere with their guts spilling out. Just completely disemboweled, dude, like the cover of that Cannibal Corpse album. You know the one. And it smells fucking disgusting, like they’ve had the drill treatment, if you know what I mean. Have you ever smelled anything in a dream, by the way? Yeah, me neither. First time for everything, I guess.

Finally, I get to a rickety-looking shack under a flickering street light. I wish my REM cycle had more originality, but I guess that’s all it could come up with. Apparently, I’m a lazy bastard even in my dreams. Still, I’m totally creeped out at the sight of this place, and there’s no way I’m gonna set foot in there. But I can hear the dudes from Pig Destroyer behind me. They’re not very far back at all. And now that massive rusty drill is switched on and spinning with that high-pitched whir you hear at the dentist’s office and all I can think about is how much I hate the dentist, how much I really would like to keep my genitals intact and how I really, REALLY don’t want that drill anywhere near my poop chute. So I practically throw myself at the door, dude. And the dudes from Pig Destroyer are right behind me now. Even over the sound of the drill, I can hear them laughing at me—it’s more of an evil cackling, really—about all the unsightly shit they’re gonna do to my undercarriage. But the door won’t open, dude. It’s totally fucking locked or stuck or barricaded or something. And then all I can hear is the relentless whir of the drill as the dudes from Pig Destroyer grab me and start forcing my pants down.

That’s when it ends. And when I wake up, I’ve totally got a boner. Which is weird because none of those dudes are really my type.

This bullshit originally ran in the August 2010 issue of Decibel magazine.
Posted by bennett at 7:15 PM 6 comments: