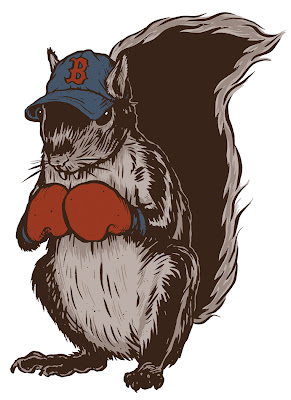 It’s Monday evening in Los Angeles, and I’ve just finished transcribing another interview. I’m patting myself on the back right now because I managed to do it without killing myself or staring out the window for three hours to see if those squirrels on the fence outside the house would actually fight to the death. As far as the interview goes: I’d name names, but what would be the point? After all: It’s the minor triumphs, the small victories, that make life worth living. Right?  But trust me on this: It was tedious and I will be demanding a raise from Albert at the earliest opportunity.

It’s Tuesday afternoon in Los Angeles and I’m listening to shitty German black metal and watching the cat clean herself.  Okay, I’m lying. I’m listening to Men At Work. I had to turn off the German black metal because it was just way too shitty. I’d name names, but what would be the point?  It’s shitty, it’s German, and you’ve heard it before. Only last time it was Norwegian or maybe Polish. But see, now I’ve already said too much. Trust me on this one, though: It was shitty.

It’s Wednesday noonish in Los Angeles, and I’m hung over as fuck. Alka-Seltzer is the only reason I’m semi-conscious and able to keep at least one eye open without moaning. Okay, I’m lying. I’m actually moaning as I type this. I find it helps in a primal-scream-therapy kind of way. Last night was another installment of Heavy Tuesday with Scott Carlson and Tom Neely on the decks of death or whatever. Someone at the bar requested Slipknot so I played “South Of Heaven.” I figure Kerry King is a Slipknot fan, so close eh-fucking-nough, amiright?

It’s Thursday morning in Los Angeles and I’m about to get on a plane to Boston, where I will freeze my tits off within seconds of exiting the airport. While waiting for my luggage, roughly seven minutes will pass before I hear someone refer to someone else as a “such a feckin’ cawksuckah, kehd.” The cocksucker in question may or may not be present when the comment is made, but let’s call it 50/50 odds that the cocksucker is not present and is in fact a member of a professional sports team. The person speaking will almost definitely be wearing a Sox cap and one of those satin Celtics jackets. Or at the very least a Pats jersey. Possibly all three.

It’s Friday afternoon in rural Massachusetts and the snow is brown and yellow and black and I fucking “love it here.” Last night my shoes filled up with ice water almost as soon as I got off the plane. There was like a half an inch of slush on the floor at the gate at Logan, I shit you not. I saw a guy accidentally knock another guy’s precious Dunky’s out of his hand and then the Dunky’s guy grabbed the first guy and started pounding him in the face and calling him a homo. They were both wearing Pats jerseys.

It’s Saturday morning at the post office and I’m getting yelled at by this townie skank who thinks I cut her in line. She reeks of booze and she’s wearing gold lamé stretch pants with a stain on the crotch. When I tell her to relax and go ahead of me, she threatens to punch me “right in the cawk.”  I can tell she wants to throw her Dunky’s in my face, but not so badly that she wants to waste it and/or possibly get chucked. I move my Dunky’s further away from her so she can’t spill it. When she gets to the clerk, she fishes nine rolls of pennies out of her purse and says she needs a money order for four dollars and 63 cents.

It’s Sunday and I can’t take it anymore. I went into the IHOP out on Soldiers Field Road to use the pisser, and someone had taken a huge, sloppy dump on the back of the toilet. You could tell it was totally on purpose because it takes some serious skill to line up that kind of shot without getting even one drop in the bowl. I mean, the entire fucking bathroom was spotless except for this huge dump on the back of the toilet, like whatever poor sap got stuck with pisser duty didn’t wanna deal with it and just pretended it wasn’t there. Can’t say I blame the guy, though. I would’ve done the same fucking thing.

This bullshit originally appeared in the March 2013 issue of Decibel magazine.

Posted by bennett at 4:48 PM No comments:

MY NEW LEAF (Turn It With Me)

93 of these things. Jesus. That means Cry Now will celebrate its 100th installment in issue 107, unless Albert pulls the plug on me before then.  I’ll have to plan something special for the occasion, turn it into a real extravaganza. Maybe kick off a nine-part investigative series on whatever it is that seems to be happening to Dave Mustaine’s brain. Written in haiku form, with a phonetic Irish accent.

I’m guessing some of you aren’t laughing at that one. Mostly because it probably seems like something I might actually attempt in this column. Which is why I’d like to take this opportunity to extend my gratitude to all of you—and Albert, and Bonzo, and of course my solid-as-a-fucking-rock Cry Now partner Brunofsky—for sticking with me through this pseudo-psychotic safari, this ongoing odyssey, this monthly marathon of occasionally half-baked ideas from a fully-cooked psyche.

I can say with 1000% certainty that I am a completely different human being today than I was on that day in 2006 when Albert called me and proceeded to make the biggest mistake of his entire life by asking, What would you write about if I gave you your own column?  I think it’s safe to say the poor bastard had no idea what he was in for. And neither did I, for that matter. Looking back on the past 92 issues, I see some ridiculous things in this column—shit I barely remember writing, and plenty of shit I probably should have kept to myself. But I also see occasional flashes of coherence.

As for the differences between then and now?  I’ve got less hair, fewer teeth, and the ability to write a cover story without staying up for three days straight on methamphetamines. In addition to writing about bands, I actually play in one of my own now. I’m older, obviously, and I like to think wiser. I’ve met an incredible amount of awesome people through this magazine, made friends with folks in bands that I admire, and have had many once-in-a-lifetime experiences that I will take to my grave. I’ve also realized that I’m not invincible, which is a bigger hurdle to overcome than one might think.

I’ve moved five times, including across the country, during the course of our first 100 issues—which is even more frequently than it seems when you consider that I’ve been living in the same house for the last four years. In fact, one of the only constants in my life since Decibel started has been Decibel itself. Albert has sent (and occasionally accompanied/babysat) me around the world to pursue stories about Scandinavian black metal, the Mexican underground, and French mega-festivals. Thanks to Decibel, I’ve shot hoops with Kerry King, shot skeet with Iron Maiden, and bum-rushed Disneyland with the Melvins. I even had the pleasure of meeting and interviewing Ronnie James Dio and Peter Steele before they passed into the great beyond. I’ve also crashed cars on the job, been threatened physically for things I’ve written in these pages, and been the subject of legal threats leveled at the publisher. I’ve been so late with stories that Albert has lost a few hairs of his own. But it was all in the pursuit of journalistic excellence. Most of it, anyway.

In honor of these memories and in light of all the aforementioned ch-ch-ch-CHAIN-ges, I’ve made a decision: The next seven installments of Cry Now will contain absolutely none of the phantasmagoric fantasy-headaches that the first 92 specialized in. No more fake letters to the editor, no more fake band correspondence, no more semiotic cartwheels through time and/or space or whatever. Definitely no more making fun of people, especially Satan, who is absolutely to be taken seriously at all times. For the next seven issues, I’m gonna be Wolf-Blitzer earnest. Grave, somber, businesslike. Stoic, even. A straight shooter.

I’m not just joshing you. I swear it.

This bullshit originally appeared in the February 2013 issue of Decibel magazine.

Posted by bennett at 1:22 PM No comments: