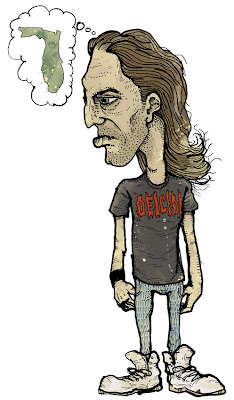 In the of my dreams, Morbid Angel’s Altars Of Madness plays all day, every day at Alibi’s, and the lap dances are on the house. Instead of doing shitty coke off the back of the toilet with Thick Rick the men’s room attendant, I’m tag-teaming bitches in the VIP room with Erik Estrada.

In the of my dreams, I’m gunning down a butt in front of Morrisound when Glen Benton swings up on his Harley. He high-fives me and says, “Just canceled another European tour, brother. Can’t stand those fuckin’ pussies, am I right?” Then he asks me to record some guest vocals on the new Deicide album.

In the of my dreams, I’m cruising the Winn-Dixie parking lot in my cherry-ass arctic-white ’78 Firebird with the Van Halen logo airbrushed onto the hood. I’ve got the T-tops on because the air-conditioning actually works, which is more than I can say about the rusted-out Yugo Tempo in the of my reality.

In the of my dreams, Jeff Becerra walks again. In fact, dude walked here all the way from just to kick some ass and take down the names. First fucker on his list? YOU.

In the of my dreams, George “Corpsegrinder” Fisher bodyslams Chris Barnes onto the broiling hot pavement before chucking his twisted carcass off an overpass and into six lanes of oncoming traffic. Barnes is so high he doesn’t feel a fucking thing. An 18-wheeler full of McDonald’s swerves to avoid him and slams into the barricade. Free Big Macs for everyone.

In the of my dreams, the Hoffman brothers hand-fire muscle juice straight into their ballbags, take turns bench-pressing each other’s trucks and then rip the apart by hand.

In the of my dreams, Obituary play Cause Of Death in its entirety at a keg party in my backyard. The dudes from Massacre are there with the Dallas Cowboys cheerleaders, who are all hanging out topless, and there’s an unlimited supply of High Life and Trevor Peres does a keg stand and Becky Griswold definitely isn’t invited because she ruined my life.

In the of my dreams, Julio forgets that I owe him that 80 bucks and then accidentally leaves an 8-ball at my house and then forgets that he did that, too.

In the Tampa of my dreams, I bring Chuck Schuldiner back to life and he dedicates the new Death album to me and takes me on world tour and then decides that he wants to focus on guitar stuff and asks me to take over as lead vocalist but I respectfully decline and say, “No, dude—Death wouldn’t be Death if you didn’t do the vocals. It would be something considerably less than Death, and that would be lame.”

In the of my dreams, I am a benevolent man.

This bullshit originally appeared in the October 2009 issue of Decibel magazine.