The Future's So Bright 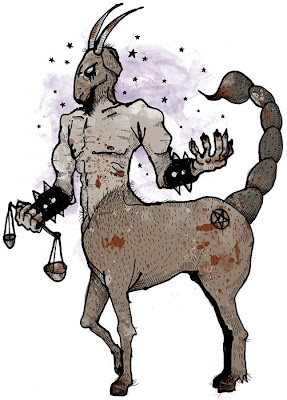 Try as you might, you cannot cheat destiny—which is why we here at Cry Now, Cry Later have consulted the stars in order to bring you the following astrological tidings. Consider this shit chiseled in stone.

Your ride to the Maryland Deathfest fell through at the last minute when Bolt Thrower’s merch dude emailed you back and said they already had a merch dude. Luckily, the truck drivers down at Stuckey’s are always willing to give a lift to anyone who doesn’t mind smoking pole. This month’s soundtrack: Gorgoroth’s Twilight Of The Idols.

With Mercury in retrograde, you’ll have to be especially vigilant this month when it comes to posers. Ask yourself: Does dudebro have a Blue Grape receipt to go with those Obituary sweatpants? This month’s soundtrack: The Metal Massacre II compilation (on vinyl), Darkthrone’s Transilvanian Hunger (first edition only).

The Anvil documentary is finally showing at your local theater, which means Lips and Robb are gonna need a place to crash. Do your hesh brethren a solid and cook up a nice big pot of spaghetti while you’re at it. This month’s soundtrack: Anvil’s Metal On Metal.

You know that hot chick from the coffee shop—the one you’ve had your eye on for a couple of weeks now? She’s got a huge cock. This month’s soundtrack: Copremesis’ Muay Thai Ladyboys.

You are charming, handsome and always right. It must be exhausting to rule this hard all the time, but you’re witty and popular enough to handle it. This month’s soundtrack: Holy Diver on repeat.

Try to wear something a little less faggy to the Deicide show next week, and maybe you won’t get your ass beaten like last time. Just sayin’. This month’s soundtrack: Bob Larson vs. Glen Benton, The Complete Phone Calls.

Someone keeps changing the lock on your front door and tossing all your shit out on the front lawn. Maybe it’s time to take a hint and move out of your parents’ basement once and for all. This month’s soundtrack: Anything by Manowar.

Satan, as personified by the neighbors’ Labradoodle, has more instructions for you than usual this month. Be sure to stock up on shotgun shells, Milkbones, and meth. This month’s soundtrack: Judas Priest’s Stained Class, Black Flag’s My War.

Your record release party wasn’t nearly as well-attended as you’d hoped. Next time, hire some strippers and give the door dude a stack of drink tickets to lure in random passers-by. This month’s soundtrack: All Danzig, all the time.

This bullshit originally appeared in the July 2009 issue of Decibel magazine.